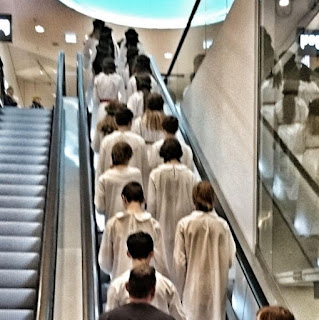 
“Michael, I swear, I left the portal but a moment...”
“That was sufficient. He diverted the latest group of new arrivals.”
“How? They would have realised they weren't going up, have felt the rise in temperature, if nothing else, as they descended...”
“Look at the footage here. The stairway was reversed. They were deceived. He was ever the Master of Lies and deceit.”
“They are innocents, pure of heart, unsuited to his purposes, unlike his usual, vile, twisted, recruits. What use are they?”
“The Enemy needs them for his pit; the pit needs bait dogs.”

This story was written to the photo prompt above for Rochelle Wisoff-Fields' Friday Fictioneers. Check out other great takes on the prompt at https://fresh.inlinkz.com/p/dd413a8e4d4f41b085dd131d822107be

Reality sucks.
No, really.
They’ll fire me out, and then, a moment later, reality’ll suck me back.
Sure, the physicists prefer to talk about it attracting, or having a heavy quantum pull.
They tried sending the smart ones, the squared off ones, the ones that would have been astronauts or nanonauts back in the day, but they couldn’t hack it, came back broken up. No. Literally. In bits.
They say that I don’t know physics from shit, and they’re probably right, but I’m the one they send when stuff needs Adjusting.
They also tried the prisoners, the expendables, the dregs, but they failed as well. A good job, I always thought.
I mean, imagine if someone whose whole family has been sent to the camps got the chance to make an Adjustment. What might they change?
No glass smothered cities from the Sneak Attack, no mutations that took a hundred generations to breed out, that’d be great, right?
But, did they really think it through in the early days? One malicious Adjustment and, what?
No victorious war of Pacific Independence. No all-powerful Party. No Hegemony.
So anyway, it’s me that gets strapped into the Gizmo. Strapped so tight I’m singing with the girls for a week after I come back.
But I’m the only one that ever has come back.
I guess the acid helps. My brain is already so fucked up that even the enormous pull exerted by reality can’t touch it. Anything I see on a Journey can’t be as weird as what I am trapped inside my skull with every damn day.
The further back you go, the higher the energy cost at the launch end. Well, I‘m going so far back this time that the lights will dim all over Chongqing Province tonight.
Some Party theorists think that this might even be the final Adjustment. The big one. Over a light year from reality.
If I can prevent the Despicable Enemy from launching the Sneak Attack, we can fight the war later, on our own timescale, when we are ready.
The lights start to flicker. The temporal implant fires up and screaming agony engulfs my cortex, repeating the only things I must remember.
Destination – United States of America.
Temporal target - Early 21st century.
Duration – One whole minute.
Mission Parameters – Minimal. Just me, him, and an old style Riot Gun.
Watch out, President Trump, there’s trouble on the way.
Wheee!

This story was written for Ruth Long and Cara Michaels' Flash Mob Writes flash fiction contest, 1 X 25
Posted by Nick at 16:30 No comments:

“Hand me the bag!”
Hanging from the footplate I snatched, swinging the harsh hessian load into the tender. It tumbled aboard, skittering gems cascading from it, sparkling seductively amongst their dowdy younger cousin, coal.
Pete grabbed the handrail.
“Gimme your hand!”
I gave him my foot - stomping his fingers.
He crashed, tumbling, to the trackside.
The thundering locomotive outdistanced the remaining gang members.
“So long, Losers!”
I ducked, avoiding their churlish, steel jacketed replies.
Lighting a cheroot, I planned my opulent future.
Florida? No. Alligators.
Canada? Too cold.
German East Africa, Pete’s idea?
Tanza...something?
Yes!
Tanzanite, here I come!

This story was written for Rebekah Postupak's 'Warmup Wednesday - 28'  flash fiction challenge. As part of this challenge, writers were required to include their birthstone. As a December baby, mine is Tanzanite.
Posted by Nick at 10:41 No comments:


Life is like mixing drinks. Adding things together make a whole new thing. A lifetime’s worth of unrequited love mixed with a gallon of faith and trust is a stable compound; stir in a large dash of untraceable money and, sure as shit, it turns into betrayal, with just a whiff of avarice for good measure.
The frost rimed window distorts my view of the street, like looking through a snowman’s kaleidoscope. If I stand in just the right spot though, there is a clear patch, just big enough to see trouble coming. And it is coming tonight, just like it always does.
In the halo of the solitary working street light, I can see her waiting. Cool and beautiful as ever, she wears her designer labels like armour from the cold that she never seems to feel. As she flicks her lighter, the flame illuminates a face more perfectly painted than any Michelangelo ever captured. A face I know as well as my own. I had thought that I knew the person behind it too, but, hell; one out of two ain’t bad.
It goes to show, you can’t be sure about much in his world, but one thing I was sure about was cocked and loaded in my coat pocket.
The thing about the cold is, it carries sound - messages for the brain to turn into pictures. You can create a whole movie in your head from just the evidence of your ears – if you know the back story.
The slam of a car door – no, two doors. A big car, heavy doors.
Footsteps across the cobblestoned street, slow and steady.
The screech of a reluctant gate hinge.
Bam. Bam. Bam. A tired, communal door shivers under the weight of the blows.
The buzz and click of the entry system. Someone decides to let a problem in - to save their door – and in the hope that it isn’t their problem.
Count the treads of four feet on threadbare carpet. Thirteen steps to my floor. Unlucky for some.
Wait.
Another thirteen steps, but only one pair of feet.
A crash of a door, a scream, a slap, and silence for a heartbeat.
The floor boards creak above me. I follow them across the ceiling, the light fitment trembles briefly and then settles as the steps move to the back.
The back!
I snatch the precious carpetbag and rush to the rear of the flat to cover the old, now disused communal staircase, a relic of the building’s grander days.
Stamp. Stamp. Stamp.
As the echo fades from the flat above, two doors are kicked in.
One above me, one behind.
I fumble for my forgotten 38, but the hammer snags in the lining of my coat.
A sharp metallic tap tap tap bounces down the stairs.
BANG!
Blinded by the flash, I stagger back, stunned and deafened.
A blunt, brutal, blow buffets my ears and I go down like a house of cards in the Chinook, bouncing once of the wall and once off the floor.
Face down, one eye examines the worn, dirty boards closer that I ever wanted to.
A harsh metallic taste invades my mouth, dripping down my face and pooling dark on the floor, some running away through ages old cracks, into the flat below.
A pair of red stilettos glides into my field of vision and a perfectly manicured hand reaches down daintily for the fallen bag using a slip of white lace handkerchief, to protect from the grubby handles I assume, not from the filthy lucre inside.
As the shoes spin away to leave me to my fate, my 38 shouts from my pocket.
I see one of the perfectly formed feet disappear in a cloud of red mist.
She falls in front of me, face scrunched up and screaming. Not so pretty now, eh?
There you go, Honey, betrayal and revenge, the perfect cocktail.
I call it Consequences.

This story was the winner in Jeff Tsuruoka's Mid-Week Blues Buster 3.11 flash fiction contest, and was inspired by this week's song 'Don't Worry Baby' by Los Lobos.
Judge Ruth Long said:-
Each one of the stories was filled with tension and angst but the devil was in the details. Nick Johns' story was slick, polished, and filled with fresh crisp details that stuck in my head like good song lyrics. In short, it’has a great noir feel that left me wanting more –  much more!
Posted by Nick at 10:42 No comments:

I snapped awake, my face was reflected from two glass eye-pieces.
I stared, like a snake hypnotised by a mongoose, vainly seeking clues in mask or cloak.
My side throbbed and ached. I strained to move, to examine the wound but my body would not obey my mind’s commands.
Who was he?
His head cocked to one side like a dog listening to a distant whistle.
“You can call me...Father.”
His finger unhooked my chin, and I fell, face down.
Searching for any shred of memory, I met a shining wall of nothing, full headlights on fog.
How did I get here?
Again the head moved.
“I brought you here. Obey my rules and you will prosper here. If you do not...” he hissed, menace clear.
His retreating feet left no marks.
My questing hand felt another body.
I scrambled away.
Where was I?
“I call this place Eden.”

This story was written for Angela Goff’s Visual Dare and marks my return, after a long absence, to this wonderful weekly flash fiction challenge.
Posted by Nick at 14:13 No comments:


“Come on, move your arse.”
I don’t look up. The tone of voice and shiny boots are enough.
An officious shadow, taller than the man himself, ripples across the cobbles.
“Move or be arrested. It’s invitation only today - unless the President sent you one.” He chuckles.
No ticket, but I’m here for a reason. In this perfect vantage point, where his car will stop, a spot I’ve occupied ever since we discovered his plans.
This meeting’s about justification. Intolerable demands, bellicose provocations will humiliate the guests until they storm out. The President will be triumphant - unless someone can stop him.
I hear the approaching roar of the motorcycle outriders.
I peer around the policeman’s legs, and the sun glistens off an opening window opposite me.
Here we go.
I kick the policeman’s knee.
It snaps back and he crashes to the ground.
I grab at his belt, snatching his radio, rolling to my feet.
“Zulu, Zulu! Upper left, fourth floor!”
The crack of my team’s gunfire echoes around the square.
A body falls from the window.
The cavalcade halts and our smiling, waving leader sweeps into his meeting.
I pour my begging cup’s coins onto the writhing body at my feet.
“Come on, move your arse”. I smile.

This story was written for Rebekah Postupak's Flash!Friday challenge 3.18
Posted by Nick at 12:42 No comments: